Re-posted from the Veronica Foods blog.

While tasting extra-virgin olive oils in Sicily, Gary Beauchamp, PhD, director of the Monell Chemical Senses Center in Philadelphia, noticed a ticklish, peppery sensation in the back of his throat. It was nearly identical to the “sting” he’d felt when swallowing a liquid form of nonsteroidal anti-inflammatory drugs  (NSAIDs), such as ibuprofen and aspirin, during previous sensory studies. Beauchamp detected a connection between olive oil and inflammation.

Further studies revealed that a compound in the oil, called oleocanthal, prevents the production of pro-inflammatory COX-1 and COX-2 enzymes – the same way NSAIDs work.

“By inhibiting these enzymes, inflammation and the increase in pain sensitivity associated with them is dampened,” says Paul Breslin, PhD, co-author of the study. Researchers found the intensity of the “throaty bite” in an oil is directly related to the amount of oleocanthal it contains. “Stronger-flavored oils from Tuscany or other regions that use the same olive varietal, have the highest oleocanthal levels,” says Breslin.
The olive oil-inflammation study’s researchers say that 50 milliliters (ml), which is about 3 1/2 Tbsp., is equal to a 200-mg tablet of ibuprofen. Breslin points out that amount of oil has more than 400 calories – a lot if you add this healthy fat without giving up others. To avoid excess calories, use extra-virgin olive oil in lieu of other fats, such as butter. 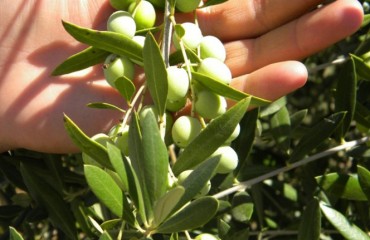