When extra virgin olive oil reaches 12 degrees, it will sometimes begin to cloud. At 10 degrees, most olive oils really begin to set up, at 7 degrees it can become a gel, and if you leave your oil in a place that is any colder, it can look like a solid block. This doesn’t just happen in one fell swoop, however. There is a evolution from liquid to solid beginning at the bottom of the container and working upwards. In many cases, it will look like two separate substances in the same container where the solidifying olive oil meets the still liquid olive oil with floating pieces of solidified olive oil in the liquid olive oil. This process is due to the naturally occurring waxes inside the olive and its pit becoming solid. Different olives have different amounts of these waxes which dictate how readily they will turn from liquid to solid, and at what temperature. So, no oils set up exactly the same when exposed to cold.

But, don’t panic if your olive oil looks a little thick after it’s been outside in chilly temperatures – it’s normal! 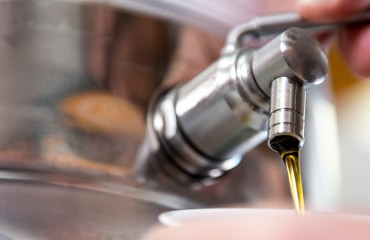